American Deja Vu: 2020 isn’t as “Unprecedented” as We Think 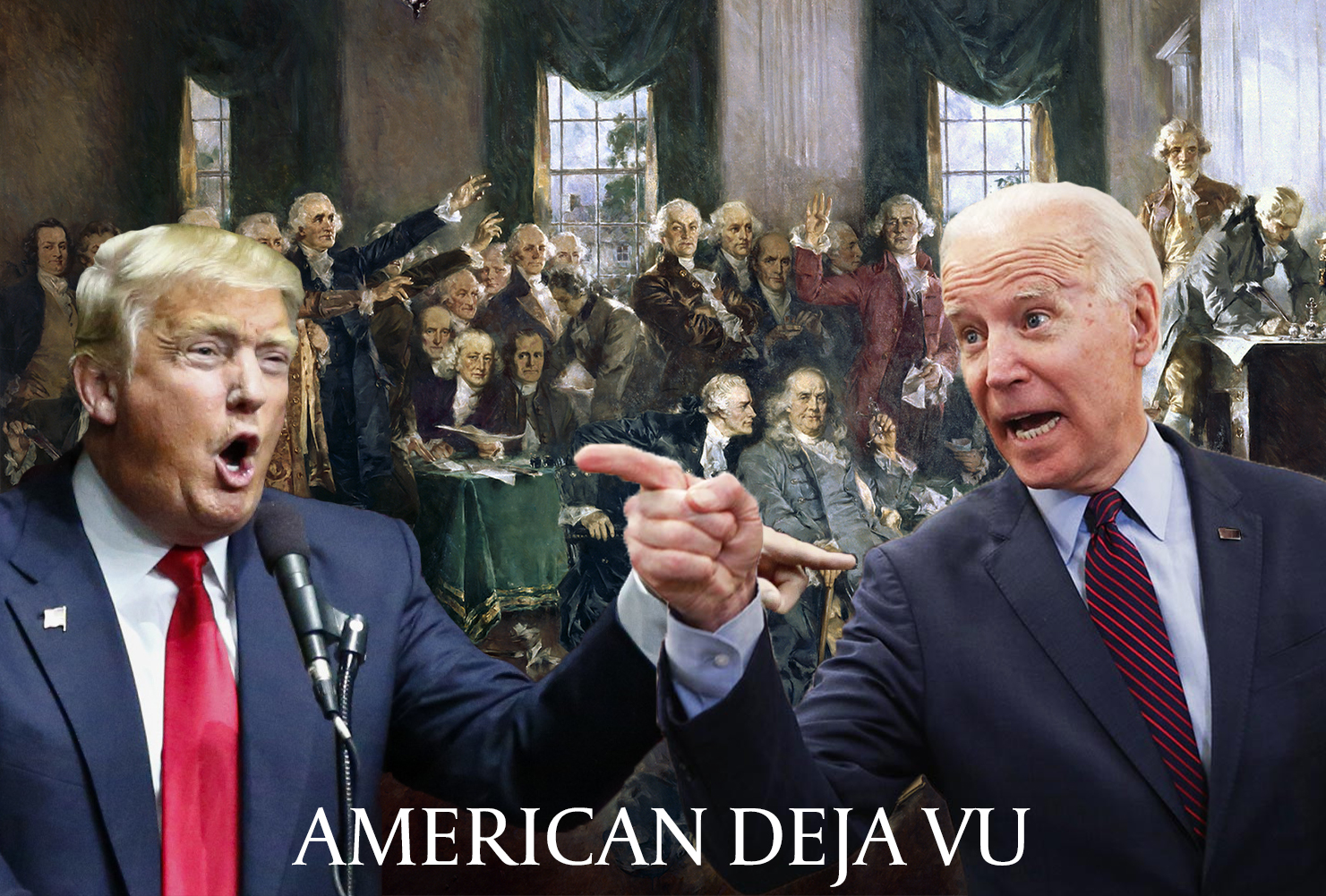 The word “unprecedented” gets thrown around these days like cheap candy in the family communal Halloween bucket.

In these unprecedented times…

These bitter political fights are unprecedented.

The blatant bias of the media is unprecedented,

Granted, it is unprecedented that Americans voted the star of a reality tv show as the most powerful leader of the free world. That is new. And possibly, it is unprecedented that we elected an orange man as president. America’s favorite resource, Wikipedia, doesn’t have an entry for orange heads of state, so I can’t confirm or deny. And we could all agree that Chick-fil-A should be in charge of running DMVs everywhere.

However, I’d like to argue, as Yogi Berra said, “It’s deja vu all over again.” Perhaps, these times are not unprecedented afterall. Things have not spiraled to the precipice of our democracy collapsing. We are not one ill-conceived tweet away from society ceasing to exist, though a glance at Trump’s Twitter could incite such a thought. Rather, we’ve faced many of the dilemmas of this election cycle before.

Instability in our government? Google election of 1876. Worldwide pandemic? Hello 1918. Ugly campaigning? Been there, done that. Media playing favorites? Who isn’t?

Let’s start with good old George. After all, he is the start of this presidential process as we know it.

During his two terms as president, things were good. America didn’t have the political infighting because, well, there wasn’t really a choice in the matter. But as soon as America’s first president stepped down, there was uncertainty as to who should be at the top of our government. Naturally, we fought.

Political infighting isn’t something that took time to develop. It was an immediate side-effect of contested elections. Think Coke and Mentos.

Enter the election of 1800 between Thomas Jefferson and John Adams.  For those of you who are not Jeopardy aficionados, this election would have occurred as Washington was dying. He died on December 14, 1799. One wonders if the advent of the negative campaign had anything to do with his passing. Again, Wikipedia lacks an entry on Negative Political Campaigns as Cause of Death.

Thomas Jefferson’s hatchet man was James T. Callender.  Callender described Adams as a “hideous hermaphroditical character, which has neither the force and firmness of a man, nor the gentleness and sensibility of a woman.” In case WebMD is not saved as a favorite bookmark on your internet browser, an individual with hermaphroditism is born with both male and female body parts. As ugly as the current election might be, we don’t see the “hermaphroditical character” charge. See, things are looking up.

Not to be outdone, Adams had bullies on his side as well. Timothy Dwight IV, the influential President of Yale University and a John Adams supporter, warned that if Jefferson were to become the president, “we would see our wives and daughters the victims of legal prostitution.”

Lest you think, “but these are the supporters of the candidates. At least they had a fair and balanced press to cover the important election issues,” uh … no. The press of that day made FOXNews and MSNBC look like Walter Cronkite was their proud father. A Massachusetts’ newspaper warned that electing “the infidel Jefferson” would mean “our churches will be prostrated, and some infamous prostitute, under the title of the Goddess of Reason, will preside in the Sanctuaries now devoted to the worship of the Most High.”  A Connecticut newspaper warned that “Jefferson would create a nation where ‘murder, robbery, rape, adultery and incest will openly be taught and practiced.’”

Hyperbole was alive and well at the turn of the 19th Century.

Fast forward to 1828 and the election between the incumbent John Quincy Adams and the populist Andrew Jackson. Jackson’s supporters called Adams “The Pimp.” Trump’s nicknames of Sleepy Joe and Nervous Nancy don’t seem so bad now. But Jackson’s guys started a rumor that Adams, during his time as the US minister to Russia, had provided female companionship to Czar Alexander. Apparently, Twitter and Facebook were not needed for rumors.

Adams’s people, not to be undone, labeled Jackson “a drunkard, a duelist and a cockfighter—and a man who couldn’t spell ‘Europe’” He had spelled it “Urope,” but in all fairness, that was pre-spellcheck days. Mistakes happen.

Jackson’s wife, Rachel, was called a “whore” and an “adulteress,” because she married Jackson before her divorce was final. And just to show you that cruelty was not invented this past presidential election, they also called Jackson’s wife fat.

In 1884, the Republicans called Democratic candidate Grover Cleveland a “lecherous beast” and a “moral leper” because he had a child from an affair that he allegedly neglected. That resulted in the chant “Ma, ma, where’s my pa?” to which Cleveland supporters responded, “Gone to the White House, ha ha ha!” Some attacks do not stand the test of time.

As you can see, bitter political fighting has been around as long as we have had contested elections. We all could agree that George was the man. But after him, it’s been a fight. And people have turned nasty.

It’s also not unprecedented that politicians like to scare voters. Politicians from all sides love to tell voters, “vote for me, or else society will end.”

I am assuming you just read that line and thought I was engaging in hyperbole. Surely, a politician would not be so blatant with a campaign ad. I am afraid to tell you, no hyperbole was harmed with that statement. And as proof, I offer you the Daisy television commercial in 1968.

In 1968, President Lyndon B. Johnson ran against Republican Barry Goldwater. Johnson’s ad started with a little girl counting up, often missing numbers. It was cute. If TikTok had been around, this would have gone viral. But then a military style voice came in with a countdown, as if counting down to a lift-off.

And when the countdown reached zero, a nuclear bomb exploded and the voice said,

These are the stakes. To make a world in which all of God’s children can live or to go into the dark. We must either love each other or we must die. Vote for President Johnson on November 3.

Seriously? Vote for me or we must die. That might be a bit of an overstatement, though Patrick Henry would be proud. But as you know, Goldwater lost. Negative ads do work.

So now that we’ve established the inevitability of malicious campaigning, what about Election Day itself? Some people are saying that this year’s election might be so close (and complicated with mail-in voting) that the candidates will not accept the results. Cue the end of democracy.

Again, hold up. We have had contested elections before. In this generation, we seem to think that unless an election is decided by the evening of the first Tuesday in November, our democratic institutions will be in peril.

We have been through much, much worse. Again, let’s go back to the election of 1800. In this election, between Adams and Jefferson, the electors cast votes for two candidates. The person with the most votes would be the president, and the person finishing second would be the vice president.

See the problem? There was a tie. And Burr wouldn’t concede even though he was the Vice President on Jefferson’s ticket. So the election gets thrown to the House of Representatives, which was controlled by the other party. In today’s politics, that would look like Trump tying with Pence for the most votes, and the election getting thrown to the House where Pelosi would decide the next president.

As I am sure most people are aware, given the popularity of the Broadway show Hamilton, Jefferson was chosen president. But it took 36 ballots for the House to determine Jefferson as the winner. Apparently, selecting the presidential candidate as president and the vice presidential candidate as vice president was not a foregone conclusion. I would have loved to have been in that first cabinet meeting. “Here Burr, drink this.”

The election of 1876 was a doozy. This election, just eleven years after the end of the Civil War, was between Republican Governor of Ohio, Rutherford B. Hayes, and the Democratic Governor of New York, Samuel Tilden.

On Election Day, there was such widespread voter intimidation against African-American voters throughout the South that in three of those Southern states – Florida, Louisiana and South Carolina – both parties sent electors to the Electoral College.  Congress didn’t know which electors to use. And of course, the election hinged on these votes.

So, Congress voted to create a bipartisan commission of 15 members of Congress and Supreme Court justices to settle this dispute. Seven commissioners were Republican, seven were Democrats, and there would be one independent, Justice David Davis of Illinois.

In a political scheme that seriously backfired, Davis was chosen by Democrats in the Illinois state legislature to serve in the U.S. Senate. They were hoping to buy his vote. But instead, being a man of ethics, he recused himself and his replacement was sympathetic to the other party. So, Hayes became the president.

This matter was not settled until 3 days before the inauguration. Imagine the Twitter feeds if inauguration was two days away, and we still didn’t know if Tweeting Trump or Sleepy Joe would be occupying the White House.

For more information on the topic, listen to Comedian of Law’s most recent podcast on “Contested Elections and Fear Mongering.”