California v. Texas: The Carrot Strikes Back and Pandora’s Box 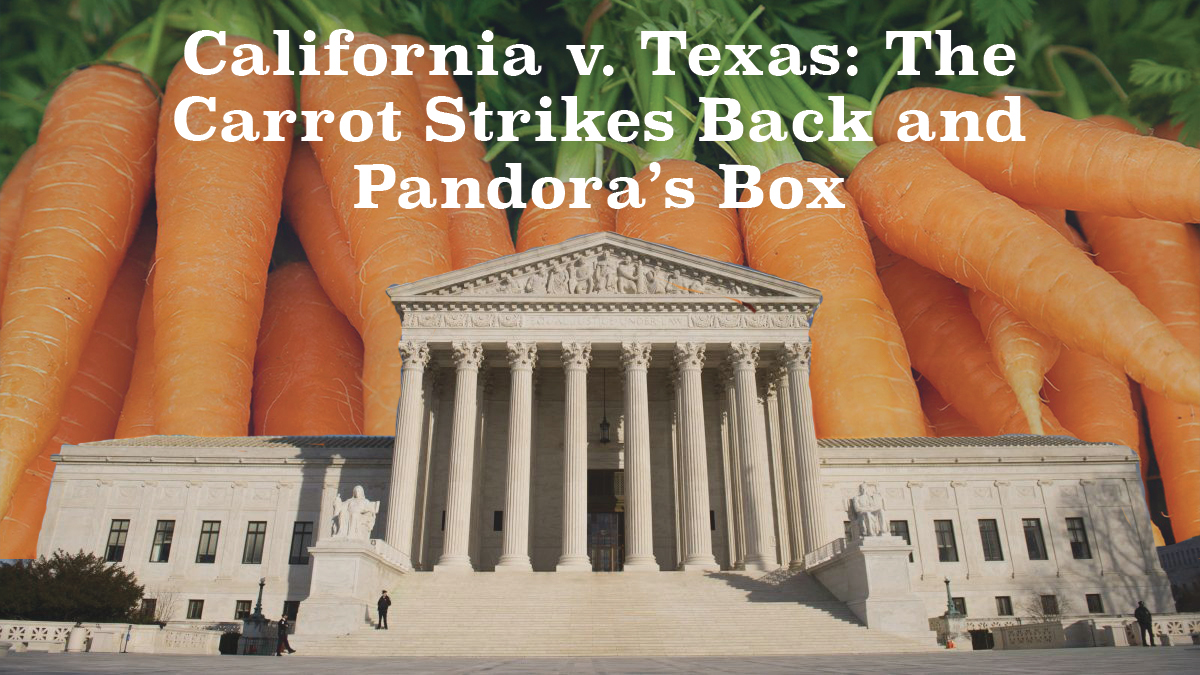 Just like Nightmare on Elm Street parts 1 through 65, there have been several renditions of the Affordable Care Act (ACA) lawsuits at the Supreme Court. And depending on your political persuasion, just as scary. California v. Texas is just the latest in a long line of Obamacare cases before the Supreme Court.

First, there was Obamacare 1: the Case of the Phantom Tax. Here, Chief Justice John Roberts played the protagonist and saved Obamacare from its early demise by declaring that the mandate to buy insurance really wasn’t a mandate per se. Rather, it was just a tax if you didn’t buy the insurance. While this reasoning resulted in the law being constitutional under the Tax and Spend Clause, it did forever change the nature of taxation. So do we pay taxes on the items in our shopping cart, or the things we left on the shelf and didn’t buy?

Next up, Obamacare 2: Finding your Corporate Religion. In this sequel, Hobby Lobby found religion, meaning it didn’t have to comply with the parts of Obamacare to which God disapproved. No word yet on how a corporation takes communion or gets baptized. But at least under the First Amendment, corporate religion is alive and well.

Then there was Obamacare 3: Late Night at the High Court where Justice Scalia exercises his comedic chops. The case dealt with whether federal tax subsidies would be available in health care exchanges where the federal government had to set up the exchange after the state refused. The Court, after ignoring the words actually used in the Act, found that there was no way Congress would have wanted the tax subsidies not to be available.

In his roast-like dissent, Scalia said that since the Court went to such great lengths to save Obamacare, maybe they should call it “SCOTUScare.” Boom. Mic drop. Exit stage left. He then said the majority’s reasoning was pure “applesauce.” Now, the Supreme Court is no stranger to trash talk, but I’m not sure how effective it is to compare other justices’ legal reasoning to fruit by-products. Finally, he said the majority’s reasoning was pure “jiggery-pokery!” I knew the justices could make up the law, but make up words as well? That’s real power.

This all leads us to the current rendition: California v. Texas. We are now up to Obamacare 7 or 8. I’ve lost count. Based on the oral arguments of this case, we’ve narrowed down the titles to this rendition of Obamacare to The Carrot Strikes Back or Pandora’s Box.

Let’s first go over the basics of this case. In Obamacare 1: the Case of the Phantom Tax, the Court upheld the Act under the Tax and Spend Clause. But in 2017, Congress removed the tax. So if there is no tax, is the law constitutional? Opponents argue that the “mandate” in the Act that requires people to buy insurance is unconstitutional. The federal government cannot mandate people to participate in commerce. We have this thing called freedom. And if you want to be a hermit living on the side of a mountain, you have that right.

If the Court determines the mandate is unconstitutional, then the next issue will be – can the mandate be severed from the rest of the law? So Obamacare would still be a good law, but the part of the law that mandates people purchase insurance would be severed out.

A critical issue for the Court is whether the mandate, if found to be unconstitutional, could be severed from the rest of the ACA such that the ACA could remain the law of the land. The reason this argument was so difficult is back during Obamacare 1, the government argued strenuously that the mandate, err, tax, was needed to force people to buy the insurance. If there was no penalty, err, tax, then people would just decide not to purchase the insurance until they actually needed it. So according to the government, the tax was indispensable to the operation of the ACA.

But now, the defenders of the ACA really can’t make that argument. Congress has since gotten rid of the tax, and thus the only thing left is a bare mandate to buy the insurance with no teeth to this requirement. And this Court seems poised to strike the mandate down as unconstitutional.

Thus the issue before the Court will become – since the mandate is unconstitutional, should the entire law be struck down as well? This brings up the legal doctrine of severability. Under this doctrine, a court will sever an unconstitutional segment from a law if it determines that is what Congress would have wanted. Stated another way, if the unconstitutional section is so important and vital to the law that there is no way Congress would have intended for the law to continue without that provision, the entire law will be struck down. Based on the arguments made during Obamacare 1, the answer was obvious— the mandate, err, tax, was indispensable to the operation of the statute.

Enter my case for the title, The Carrot Strikes Back. The Court was inordinately consumed with vegetable metaphors and based upon the vegetable references, the Court might be willing to change its position. Chief Justice John Roberts said, “Was Congress wrong when it said that the mandate was the key to the whole thing— that we spent all that time talking about broccoli for nothing?”

To which Mr. Verrilli responded, “So, Mr. Chief Justice, in 2010, I don’t think there’s any doubt that Congress made a predictive judgment about what would be needed to create an effective market. And they adopted a carrot-and-stick approach. There were a lot of carrots.”

Thus began an extended metaphor with several more comparisons to the tax being the stick and the benefits of the ACA being the carrots. Verrilli concluded the vegetable references by saying, “turns out the carrots worked without the stick.” 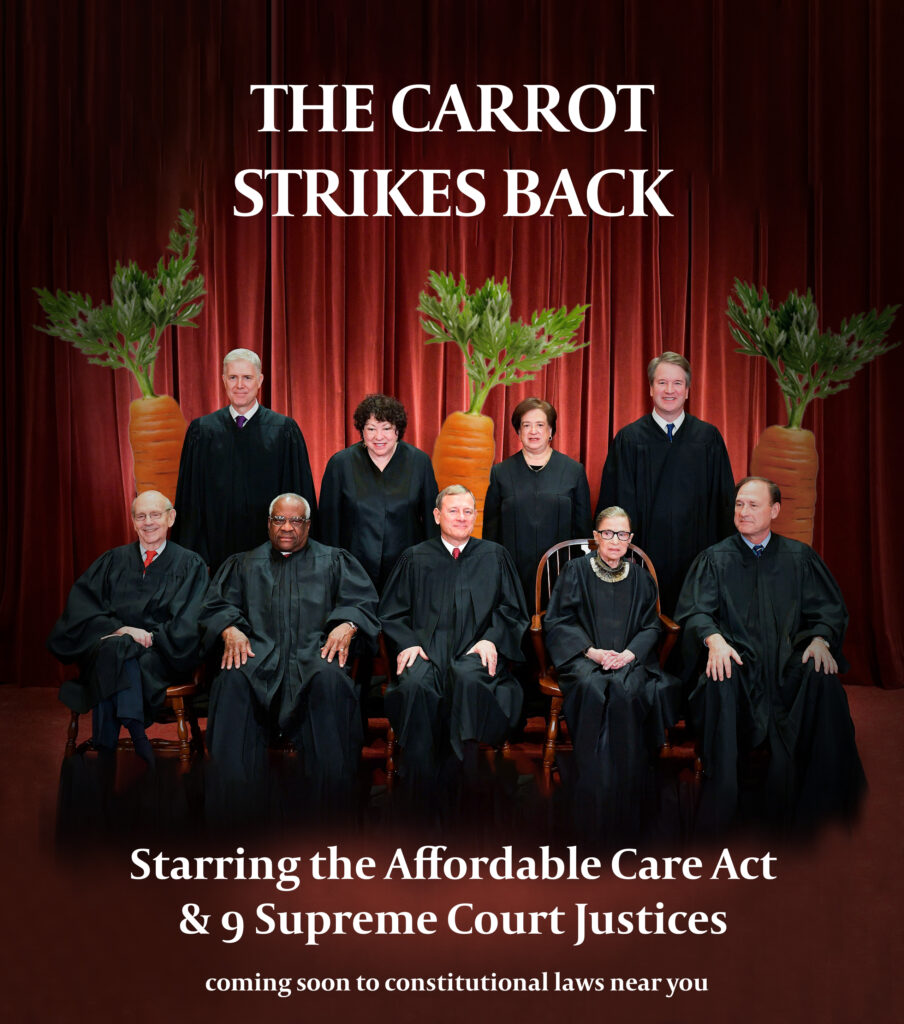 But, this rendition could also be called Pandora’s Box. Many justices were dangerously close to radically changing its rules on standing to allow anyone to challenge a law in court who is subject to the law, and thus open up all kinds of unintended consequences. This would be a vast departure to the current rule that requires a credible threat of enforcement of a law against a person before that person can challenge the law in court.

To illustrate this point, Justice Thomas asked General Mongan of California about a hypothetical mask mandate during this Covid era. He asked,

“In most places there is no penalty for wearing a face mask or a mask during Covid, but there is some degree of opprobrium if one does not wear it in certain settings. What if someone violates that command? Let’s say it’s in similar terms to the mandate here but no penalty. Would they have standing to challenge the mandate to wear a mask?”

The last counsel to argue, General Wall for Texas, seemed to suggest an interpretation of standing that, Justice Roberts says, “expands standing dramatically.” Kagan agrees, stating, “The United States is usually pretty stingy about standing law, so it did surprise me, in much the way that it surprised the Chief Justice, that you’re coming in here with a theory which, to my mind, threatens to kind of explode standing doctrine.”

If the Court were to allow anyone to challenge a law, like a mask mandate, without showing any credible threat of enforcement of the law, this would open up Pandora’s Box and broadly open up the doors of the federal judiciary to all kinds of cases. And this could prove quite interesting as there are a lot of crazy laws out there.

Under the old rules governing standing, before a person could challenge a rule on donkeys taking naps in bathtubs, there had to be an actual credible threat of enforcement against donkeys. But if some members of the Court get their way in California v. Texas, a person can challenge a law just because the law exists and is bad. Pandora’s Box is creaking, and if it bursts open, we may see a rise in cases challenging farm animals, bingo, and arcade games.

Whether we call this rendition of the Obamacare lawsuits The Carrot Strikes Back, Pandora’s Box, or Vegetables: the Land of Laws, the story line will be compelling. In the end, we can expect the ACA, like Rocky Balboa, will survive this round and will remain the law of the land.

For our podcast about Obamacare, listen here.