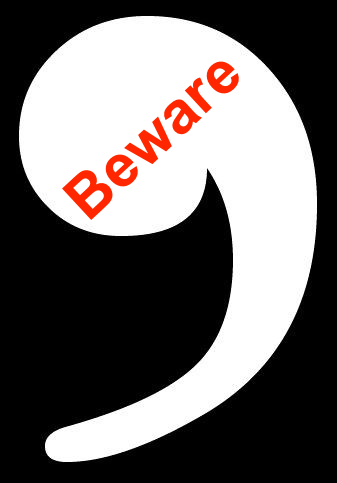 While we jest, National Punctuation Day is a much-needed celebration for the good that punctuation brings to our world.  Just think of the ramifications if we didn’t have punctuation.

The facts show that commas save lives!

While lack of proper punctuation can endanger grandma’s life, it can also torpedo your legal career. That’s why we are sharing a quick refresher outlining some best punctuation practices.

Only one space between sentences. Always tend to the basics, and one of the most basic blunders committed by lawyers today is using two spaces between sentences. Admittedly, you might have learned the two-space rule in grade school, but that convention is a remnant of typewriter days when letters were monospaced on the page. Today, you’re presumably using a computer, so stick with the one space rule.

Apostrophes. Apostrophes are used to indicate plurality and possession, and this is an area ripe for errors. Indeed, a plaintiff’s lawyer was served a scathing response from defense counsel—eight pages of questions, in fact—after she filed a complaint that was riddled with grammatical and punctuation errors. In that scenario, one of the most prolific issues was the lawyer’s ineffective and confusing use of apostrophes. According to defense counsel, her indiscriminate use of “defendants,” “defendant’s,” and “defendants’” rendered the complaint unintelligible, thus making it impossible to respond effectively.

Here are the rules and corresponding examples: To form a word’s plural, add an –s, but do not use an apostrophe. Add -’ only to indicate possession for a plural that ends in s. Add -’s for singular words that end with the letter s.

Quotation marks. You’ll find this error frequently, but the rule regarding punctuation and quotation marks is quite simple once you commit it to memory. Periods and commas should always be inside quotation marks, while question marks and semi-colons go outside unless the mark is part of the underlying quote. One more tidbit here: It’s generally considered bad form to use “quotation marks” or underscoring for emphasis. Instead, use italics because it improves readability.

Also, commas are a must for setting off sentence parts that might easily collide or cause confusion. Ponder a chef’s statement, “I like to bake children” as compared with “I like to bake, children.” It’s a safe bet that the children hope he goes with the second option. To avoid confusion, use that comma.

Finally, remember to use serial commas. A serial comma is placed immediately before the conjunction in any list of items. Some lean against this in informal writing, but it’s never incorrect, it reduces ambiguity, and your writing will be cleaner.

Spelling and grammar check. Your word processing software’s spelling and grammar check is your frenemy. Really, it is. Use it at your own risk, but never use it without independent editing. For instance, if you’re drafting a letter to your client, Brian, spellcheck will not take issue with you addressing him as brain. Brian, on the other hand, might take issue with that. Invest in the current edition of a great style guide and then reference it often. It’s worth noting that our favorite style guide is Bryan Garner’s The Redbook: A Manual on Legal Style (3d ed. 2013).