Filling the Seat: How ACB’s Confirmation Stacks Up with History 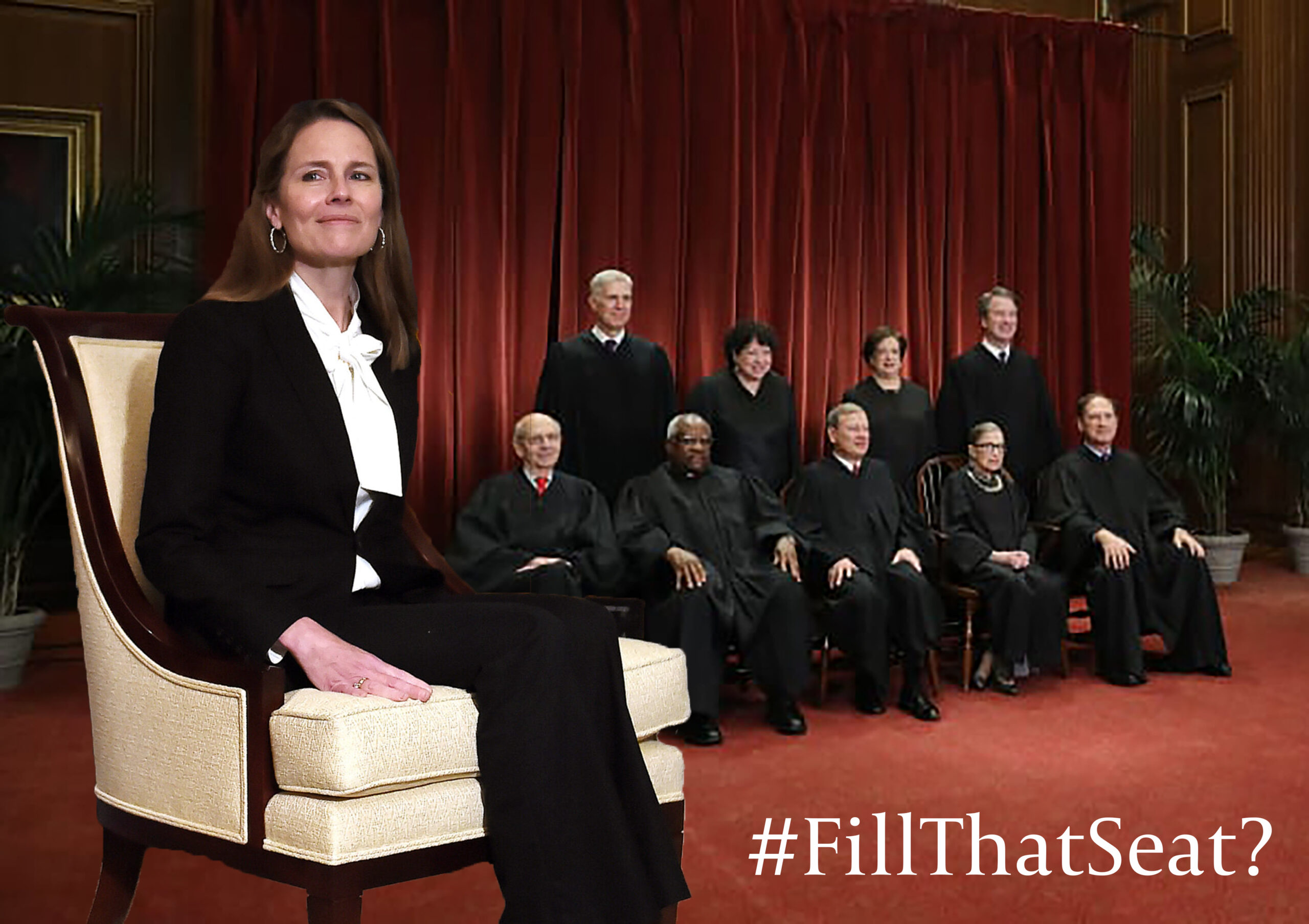 This week, Amy Coney Barrett has been in the spotlight as she undergoes her confirmation hearings for possible appointment to the Supreme Court. Much about this confirmation hearing has been novel from the Covid format to sports and Star Wars references (proof we need more women in government) to the speed at which this confirmation has moved forward. For example, this has to be the first time a committee chairman has suggested to “put a quarter in it” to help a presenter unmute her Zoom mic. I’m not sure Boomers have figured out Zoom yet but if pretending it’s an antiquated machine works for them, so be it.

Mostly, this hearing has been an opportunity for senators to use their 30 minutes to give personal speeches rather than question Judge Barrett. Democrats have been harping on the speed of ACB’s confirmation and targeting her stance on Roe v. Wade and the Affordable Care Act while Republicans just love to point out that she is a mom. I’m not sure either strategy offers an opportunity for a thorough examination of ACB’s fitness for the High Court. However, she did impress when she was asked about the notes she was referencing and she held up a blank notebook. Most of us can’t remember where we last put our keys, so her ability to speak coherently and recall cases without a single note is reason enough to confirm her.

Regardless of what’s being said on the floor, this confirmation hearing has been contentious for the American people. With the presidential election less than 3 weeks away, some have been frustrated that a Supreme Court nomination has been pushed forward, fearing that ACB’s confirmation would solidify a 6-3 conservative majority. Even more frustrating to them is that ACB has refused to state her opinions on the hot topics, claiming she will use all facts presented to her to make unbiased decisions when the time comes. She referenced RBG’s and Kagan’s confirmation hearings in which they refused to state their positions on certain matters. This seems fitting given the likelihood that ACB is taking the seat RBG vacated. In fact, Justice Ginsburg set a standard for confirmation hearings, informally known as the “Ginsburg Rule,” that nominees shouldn’t disclose their personal views on issues if there is the potential that the topic will come before the court. While this idea didn’t start with Ginsburg, it certainly has been applied more frequently since her 1993 hearing.

This begs the question of what Supreme Court confirmation hearings should look like. Since 1789, there have been 164 Supreme Court Nominations. 126 of them were confirmed, though only 119 accepted the position. Perhaps the most shocking stat is that only 12 nominations have been rejected (the remaining nominations were either withdrawn or not acted on). That is a 91% success rate among legitimate nominations (i.e. not counting the withdrawn or inactive nominations). So despite the contention surrounding ACB’s nomination, it is highly likely she will be confirmed.

Is she wrong to avoid stating her personal views on certain questions? Absolutely not. It is generally agreed upon that it is unwise to commit oneself to a decision on a certain issue before it comes up in court. This makes sense. The potential justice hasn’t seen all the presenting evidence or heard the full case yet. Deciding a position before it appears in court would derail the judicial independence and due process of law. However, it seems that both sides like to take issue with this position whenever the court nominee isn’t in alignment with their own respective views. As it goes with politics, we tend to like to remember the history and precedent that benefits us at the moment even if it means ignoring the implications of our actions if applied to the opposite viewpoint. But I digress.

Perhaps clarity can be found in recalling the purpose of the Supreme Court and the confirmation hearings. We find in Article III of the Constitution that the measures outlined such as tenure and salary have been in-stated to insulate judges from political pressures. For all intents and purposes, this means that justices are expected to be neutral when it comes to applying the law. Though it’s not that simple and people aren’t actually neutral (nor should they be), most agree that the role of a Supreme Court justice is to fairly and accurately analyze our laws, cases and precedents, and apply them to current issues without being distracted by personal opinion.

This week in her hearing, ACB expressed, “I can’t take policy positions or express my personal views before the committee. My personal views don’t have anything to do with how I would decide cases, and I don’t want anybody to be unclear about that.”

On the contrary, how can we know how a nominee would handle rulings on the High Court if we don’t know their personal views? This is also a fair point. The role of the Judiciary Committee is to obtain information on the nominee’s qualifications, character, and understanding of the Constitution and the law. Questions are designed to determine the nominee’s knowledge of the law and past rulings, his or her judicial philosophy and approach, as well as the nominee’s stances on issues, past rulings, previous public statements, and so on.

All of that to say, there is no one agreed upon approach to confirmation hearings. The senators asking questions usually adhere to their own agenda, making statements, and asking questions that would lead to their desired outcome. Case in point delivered by Senator Whitehouse this past week when he used his 30 minutes to detail (with visuals) his conspiracy theory that “dark money” controls the Court, all without asking ACB a single question. One could infer that these hearings are basically a free-for-all for senators to direct the messaging where they see fit, putting the ball in the nominee’s court to create sense of it all in how they choose to respond .

So, let’s get into the fun stuff. If 91% of legit nominations are confirmed, how bad were the other 9%?

The most recent and most famous rejection was Ronald Reagan’s 1987 nomination, Robert Bork. You may be familiar with the phrase “to Bork” (v. to vilify) which came about because Bork’s supporters felt that his character was unfairly attacked in an organized campaign. One of the reason’s he was attacked so much was because his hearing was one of the first to be televised and he came off as wildly unprepared for questioning.

But, the incidence that “borked” him was the statement made by Senator Kennedy at the hearings. Sen. Kennedy “said that adding Bork to the Supreme Court would force women into back-alley abortions and black Americans back to segregated lunch counters,” adding that with Bork, ‘the doors of the federal courts would be shut on the fingers of millions of citizens for whom the judiciary is — and is often the only — protector of the individual rights that are the heart of our democracy.’”

Those scathing remarks would be hard to recover from, especially given their accessibility to the American public on TV. And while these comments may be a stretch, Bork wasn’t fully “borked.” There were other grounds for why Bork was rejected and attacked for his views. His previous rulings included denying the constitutional right to privacy to gay people and that a workplace sterilization policy didn’t violate OSHA. He was also heavily criticized for his view that judges shouldn’t interpret the Constitution beyond the words of the founding fathers and for his beliefs on gender equality and civil rights. Before the hearings, much of America didn’t have an opinion on Bork and many public figures including Biden and Orrin Hatch were supportive of Bork. That all fell apart at the hearing. So, was Bork fairly rejected? Many disagree on the outcome, but the committee had the final word with a 42-58 rejection.

The winner for clearest rejection and also one of the earliest rejections was Madison’s nomination of Alexander Wolcott. It was said his nomination was “a tribute to Wolcott’s political loyalty, not his legal acumen…regarded as unqualified for the High Court.” He was rejected with a vote of 9-24, perhaps one of the most decisive votes. He couldn’t even get his own Republican party to support him which makes sense since he was described as depraved and abominable.

While it appears that most of the 12 rejections boiled down to political differences and disagreements, at least one judge was just downright bad at his job. Nixon’s 1970 nominee G. Harrold Carswell was regarded as a “less than stellar judge” with 58% of his decisions as a district court judge overturned on appeal. His reputation was further damaged by Senator Hruska’s defense of Carswell: “Even if he is mediocre, there are a lot of mediocre judges and people and lawyers, and they’re entitled to a little representation, aren’t they?” I’m not sure how Hruska thought that would help. Alas, Carswell was rejected 45-51 which honestly seems a little too close given his track record.

Clearly, Supreme Court nominations have undergone their fair share of drama over the years. Not to be overlooked, the 2018 Kavanaugh hearings were memorable for many Americans. His hearing was full of many tense, emotional moments from protesters to Graham’s outburst to witness testimonies. Though, the biggest talking point of Kavanagh’s confirmation remains to be the sexual assault allegations that ignited a spark. These charged conversations polarized Americans and left many questions and hurt in the wake of his confirmation.

The same could be said of Justice Thomas’ confirmation.

Confirmation hearings can be a tough watch, especially when the Supreme Court makes decisions about sensitive issues that hit close to home for many people. Confirming a justice to the Supreme Court is no small thing. The matter should be taken seriously and it is no surprise when issues and drama do come up. Which is why this week may be a reprieve and even a relief given the last round of confirmation hearings. ACB’s hearing has been refreshingly low-key. So while much conversation has been about the timing of her nomination, her hearings have offered thoughtful insight into what this process should entail and how a nominee can handle them without as much controversy.

For more info on the topic, check out Comedian of Law’s podcast.