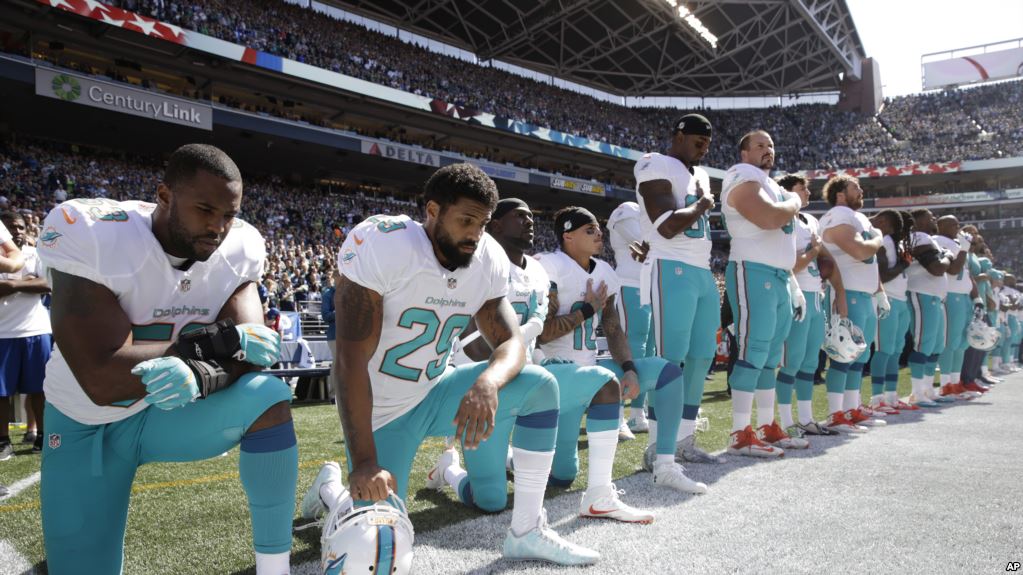 Just like last year, the NFL is fine with kneeling during the National Anthem. Except this year, they are utilizing a different kind of fine. No longer do they say fine while silently disapproving because they are too flustered to continue arguing (a situation every man has found himself in. Word of advice: it’s not fine!). This new fine comes with money attached. That’s right, the NFL is going to start issuing fines to teams with players that sit or show disrespect during the national anthem.

It’s about time the NFL did something about this issue. Showing disrespect to the flag and those that protect America really hurts their business. The lack of action from the league raised questions about the state of capitalism in America. If one the biggest corporations does not care about profits dropping, does capitalism even exist anymore?

But never fear, in accordance with the National Anthem of Capitalistic Corporations, the NFL fell back on the Personal Conduct Policy that says “Everyone who is part of the league must refrain from ‘conduct detrimental to the integrity of and public confidence in’ the NFL.” Apparently, losing millions of dollars is “detrimental to the league.” So the new policy states that “[t]he commissioner will impose appropriate discipline on league personnel who do not stand and show respect for the flag and the anthem.”

For those that want players to stand during the National Anthem and show respect, this may look like a victory. But it will only be a surface victory for them as the players can still kneel in the locker rooms. This new fix is reminiscent of the fixed catch rule, which tried to appease everyone, but appeased no one. With so many NFL players in trouble for drug use, perhaps the NFL also has a new definition of “fix.”

But wait, you say, don’t the NFL players have a free speech right to kneel during the national anthem to protest? This argument has been raised across social and the anti-social media. Here’s an article from NY Times. And one from Forbes. And another.

In an emphatic word—no.  NFL players do have free speech rights.  But the First Amendment only restricts government from silencing speech, not private employers.  Private employers absolutely have a right to silence the speech of its employees, while on the job, in the interest of making money. That, fortunately or unfortunately, is the American capitalistic way.  So if a Dairy Queen employee is telling customers that the ice cream at Stone Cold Creamery tastes better, said employee can be fired both for costing his employer money and for being stupid.  Everyone knows the dipped cones at DQ rock!

If Congress passed a law saying NFL players could not kneel for the anthem, that would be a First Amendment issue.  But private employers have a higher calling—the calling of the almighty dollar.  And according to the Gospel of Greed and the Constitution, that is just fine.

Comedian of Law offers continuing legal education that educates and entertains! We offer live and online CLE classes. John Cleese, of Monty Python fame, said, “he who laughs most learns best!” Check us out today to learn more about your First Amendment rights!