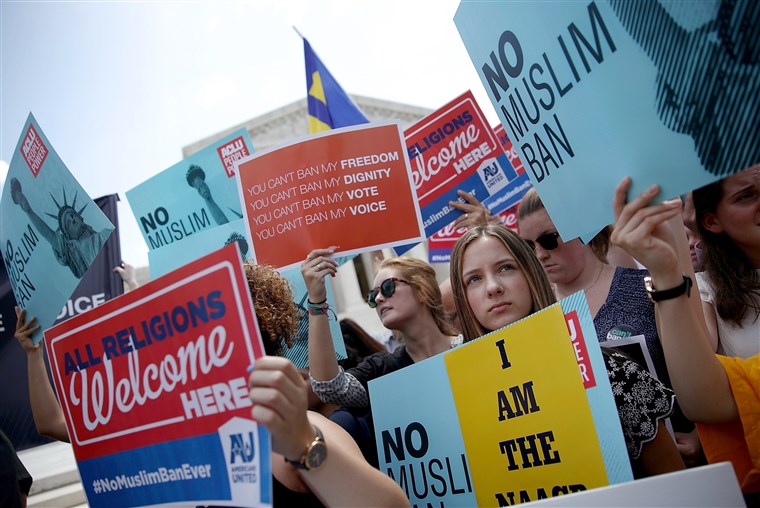 While Trump may have been denied on Twitter, he won the real battle in the Supreme Court. With his first two travel bans being received about as well as the news of his election among late night comedians, President Trump came back with a third version of his travel ban. And unlike the families at the border, this one slipped through unharmed.

The ban issued by President Trump would keep unwanted visitors from Iran, North Korea (I wonder how Trump’s best friend Kim Jung Un will take this news), Syria, Libya, Yemen, Somalia, and Venezuela out of America in varying degrees. The ban had also previously included Chad, but Trump removed the country from the list because it met the basic requirements of immigration standards. This surely came as a shock to a lot of people—we have immigration standards other than keep out!

The Court ruled 5-4 in favor of President Trump and his travel ban. Chief Justice Roberts wrote the majority opinion and said that the ban was “squarely within the scope of Presidential authority under the INA [Immigration and Nationality Act].” These laws state that anyone entering the United States must provide certain information to satisfy the requirements to enter the country. Under this Act the President also has the authority to restrict people that could be detrimental to the interests of the United States.

Despite the seemingly clear-cut legality of the President’s actions based on the INA, four Justices dissented. These Justices, headed by Sotomayor, argued that the ban was not to protect America, but to prevent Muslims from entering the country. To be fair, the dissent was based on the actual words of Candidate Trump.  Trump was, and is, a master of saying all the wrong things at all the wrong times. But are we really going to start holding candidates to their campaign rhetoric? Chief Justice Roberts deemed Trump’s statements as irrelevant to the legality of the ban.

Democrats and liberals have become fire breathing llamas with the all the flaming they are spitting at the Court and President Trump. Omar Jadwat, director of the ACLU’s Immigrants’ Rights Project said, “His ruling will go down in history as one of the Supreme Court’s great failures.” Mr. Jadwat must have never read about Bertman v. Kirsch Co. where the Court denied a writ of certiorari despite the greatest dissenting opinion of all time from Justice Black in 1964.

Nancy Pelosi, the Democratic leader in the House, didn’t want to miss the Trump slam fest, as if that party ever ends, and said, “The President’s disdain for our values and the safety of the American people has led him to undermine relationships with critical allies, embrace autocrats and dictators, launch damaging trade wars and sow fear in our communities with his hateful, ugly language. Whether tearing children from their parents at the border or advancing a ban founded on open bigotry, President Trump is making our nation less safe at home and less respected abroad.”

Even though many have voiced their firm disagreement on the matter, the Supreme Court’s ruling will stand, 5-4 in favor of everyone’s favorite, or least favorite, President.